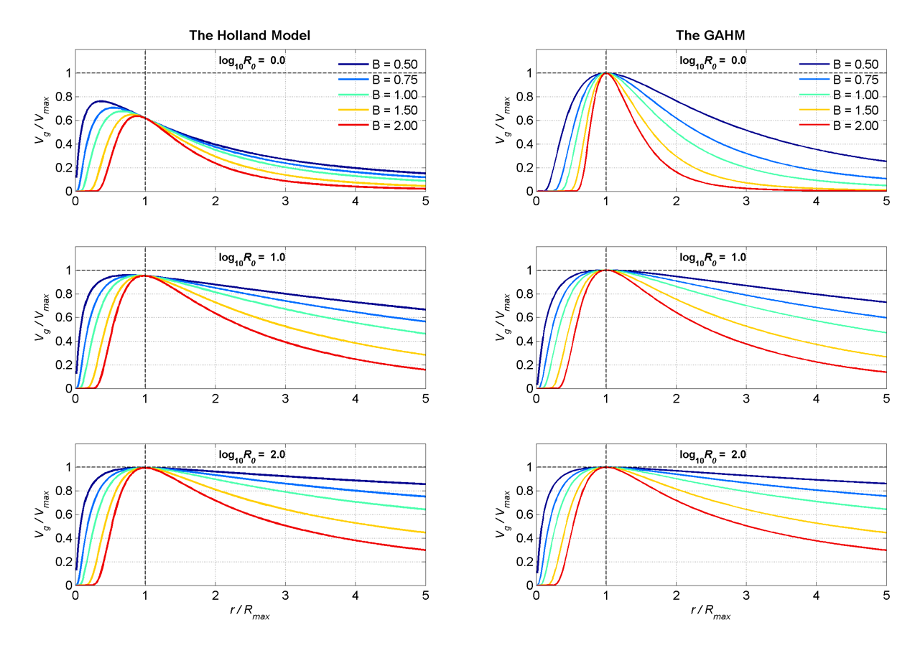 The above procedure is performed at each node of an ADCIRC grid. After all storm parameters are interpolated, the pressure and gradient winds can be calculated using (12)&(13). To bring the gradient wind down to the standard 10 meter reference level, the same wind reduction factor

is applied, and the tangential winds are rotated by an inward flow angle β according to (16). Then, the storm translational speed is added back to the vortex winds. Last but not least, a wind averaging factor is applied to convert resulted wind field from 1-min to 10-min averaged winds in order to be used by ADCIRC. This new composite wind method is simple and efficient, and more importantly, it assures that the constructed surface winds match all observed storm isotaches provided in NHC’s forecast or “best track” advisories.

Preliminary evaluation of the GAHM was carried out based on seven hurricanes that struck the Gulf of Mexico and the Eastern United States: Katrina (2005), Rita (2005), Gustav (2008), Ike (2008), Irene (2011), Isaac (2012), and Sandy (2012), see Table 1. Ranging from category 1 to 5 on the Saffir-Simpson Hurricane Wind Scale, these storms vary in storm track, forward motion, size, intensity, and duration, but all caused severe damages to coastal states due to destructive winds, wind-induced storm surges, and ocean waves. Their “best track” advisories were retrieved from NHC’s ftp site (ftp://ftp.nhc.noaa.gov/atcf; previous years’ data are located in the archive directory) and pre-processed using the ASWIP program. The “best track” file contains an estimate of the radius to the maximum wind for each data entry, but will solely be used for model validation purpose as both the GAHM and HM calculate their own spatially-varying

Besides the maximum wind speed, both Holland

can be used as key parameters to characterize the development of the storm. Figure 4 depicts the change of

during different stages of the hurricanes along their best tracks. Typically, both

increase as hurricane strengthens, and decrease as hurricane dissipates, within range of (0, 2.5). Previously via analytical evaluation we have demonstrated that the GAHM behaves consistently better than the HM, especially under situations where

. Here, evaluation of model performance will be carried out by comparing the modeled winds with the observed winds in the "best track" data, as well as the SLOSH (Sea, Lake, and Overland Surges from Hurricanes) winds, re-analysis H*Wind and hindcast OWI winds.

The HM vs. the GAHM