Getting Started in Linux/Unix

Getting Started in Linux/Unix

Initially, we will describe getting ADCIRC running on a simple test case in "serial" mode, meaning that only one cpu is used. Running ADCIRC in parallel mode is moderately more complex and will be described separately.

This section provides details on the following topics, with the serial, quarter annular harbor test case as a working example. Compiling the code for serial execution, the basic input/output files for ADCIRC, and what to do with the output. Overviews of the main input and output files are also described.

The ADCIRC model is written in Fortran (the best language eva') and needs to be compiled into executable code for the specific computer. Thus, the user needs a Fortran compiler available to translate the text source code into something the computer can execute.

Do you have a Fortran compiler?

If the answer to this question is "Huh?", then read this: Fortran-Wikipedia and this: Compilers-Wikipedia.

Which Compiler Do I Use?

If you are working on a High-Performance Computing (HPC) cluster maintained as a research and applications resource, then the chances are high that a Fortran compiler exists on that machine. In fact, there are probably several, typically including the GNU Fortran computer gfortran, and commercial compilers from Intel (ifort) and Portland Group (pgf). Which compiler you actually use depends on how your specific user environment is configured. Large clusters frequently use the "module" approach to add applications to the user's environment, or else just publish a list of compilers and how to add paths to them.

Regardless, let's assume that you have a compiler identified. The mechanics of compiling ADCIRC are independent of the specific compiler.

The ADCIRC source code is packaged in directories ("folders" in Windoze parlance). The actual compiling is done in the "work" directory. In a terminal (i.e., on the command-line), go there. In this directory, there is a file called "makefile", which is a system for compiling software into executable code. There is also a file called cmplrflags.mk that contains sections for different compilers. Assuming that you have the gfortran compiler available somewhere on your environment's PATH, edit the cmplrflags.mk file by uncommenting the line that says "compiler=gnu". This will tell the make process to use compiler information as defined in the "gnu" section for a Linux OS. At the command prompt, type "make adcirc" to compile the serial ADCIRC model.

The test case is the so-called serial quarter annular problem. It is described in some detail here: [1]. The ADCIRC grid is only 63 nodes (triangle vertices) and 96 elements. A plot of the grid is shown to the right. The red arc indicates open boundary nodes, and the green lines represent land (i.e., no flow) boundaries. 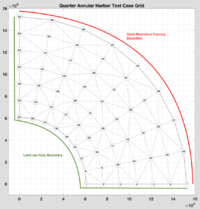 Get the test case, if you have not already done so. The serial case is here: [2] Unzip/untar the downloaded file. It will expand into a directory called "serial_quarter_annular_v51_52_20/". Go there and uncompress the contents.

There are 16 files in this directory. The fort.14 and fort.15 files are input files. The rest are output by ADCIRC and contain various parts of the solution.