Compiling is the act of turning the ADCIRC source code into an executable that can be run. ADCIRC is written in Fortran and C, so Fortran and C compilers are needed, as a minimum.

The ADCIRC model is minimally dependent on external libraries, though they may be included at the user's option and enable many important features of the model code.

The CMake build system provides users with a cross-platform (Linux, MacOSX, Windows) interface for building the ADCIRC model. CMake can be used as either a command-line utility, a terminal GUI with the Curses library, or a Qt GUI on Windows. CMake is available on most Linux distributions as either a package or in the case of shared clusters, as a module. The source code and compiled executables are available here.

The ADCIRC CMake build system will search for specific environment variables to help it find packages in nonstandard locations, as is often the case on shared systems.

CMake is generally used to create a shadow build, that is the build files are wholely separated from the source code. The simplest way to do this is to create a folder within the source code folder called something like "build". For the instructions below, we'll assume that you are inside this directory during the command examples.

CMake can build the ADCIRC model source code using multiple processors. Add the flag "-j#" where "#" is the number of processors to use to your make command. This will allow each component of the code to be built separately and may not provide benefits above 6-7 processors. This cannot be done using the legacy makefile as it does not contain the appropriate logic.

The command-line interface allows the CMake build system to run with minimal user interaction and can be scripted. CMake building happens in two steps. First, there is a configuration step where the environment is sensed, tested, and a Makefile is generated. Second, a build step is triggered which executes the generated build files. Variables are specified for CMake using the "-DVARIABLE=VALUE" syntax.

By default, CMake will always select the system default compilers. This can easily be overridden by specifying the desired compilers on the command line. For example, to use the Intel compilers:

Note that when specifying the compilers, the MPI library will need to match the specified compilers (i.e. the mpif90 found in your PATH variable should correspond to ifort) or parallel code will not be enabled.

When the above command is run, CMake will perform a series of checks, however, it will not know which programs in the ADCIRC source code suite you want to build. The following table shows the build options that can be enabled.

When CMake runs successfully, you can then simply type "make" to build the executables.

The following shows additional variables that can be specified in the command line which can enable features or optimizations. They are used with the same syntax as above.

The Curses GUI available with cmake allows the user to explore and set variables in a more user-friendly way. It is still recommended to set the compilers on the command line during the first call of cmake. The executable to use the GUI is "ccmake" rather than "cmake".

The user will be presented with an interface that looks like: 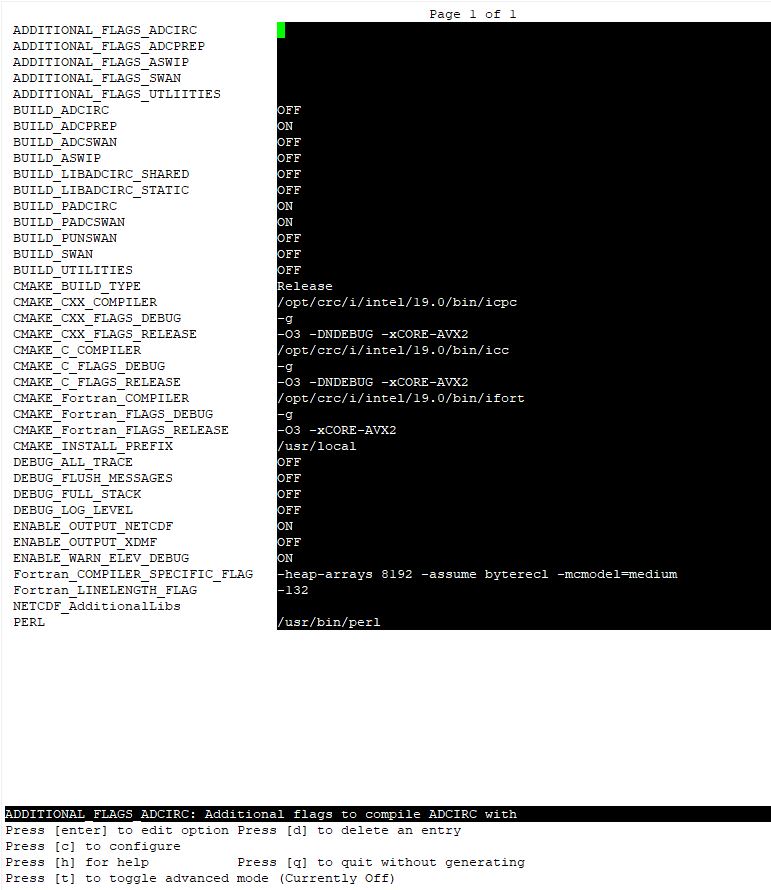 The options on the screen can be toggled through and edited interactively using the keyboard. When you are happy with the specified options, press "c" to configure. If there are no errors, you will be given the option to press "g" to generate makefiles. After generating, ccmake will close and you can type "make". 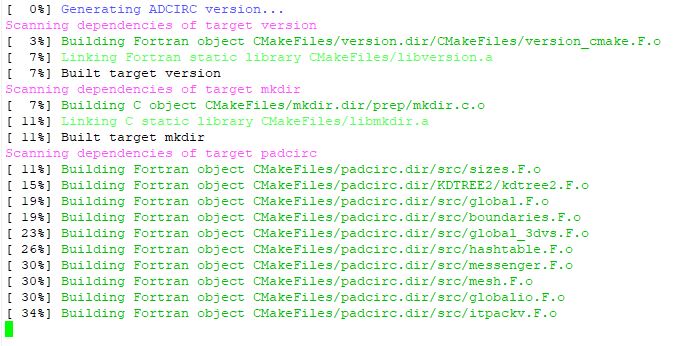